Candidates beware, 'boss from hell' ahead... 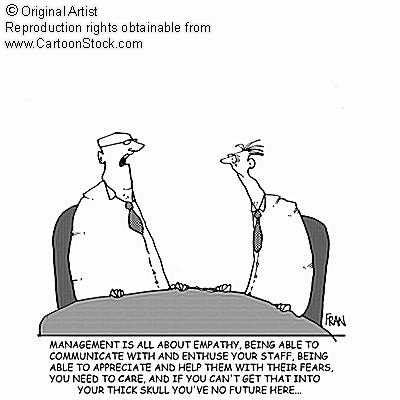 Tara Weiss in her article 'Who's interviewing who' suggests a way to find out if the mild mannered 'future' boss who is also the interviewer would turn out later to be the 'boss from hell' skilled at making his/her subordinates' life miserable.

'If everyone involved has their best face on during a job interview, how can a candidate tell whether the potential manager is a decent person to work for?

Caroline Nahas, a managing director at the human resources firm Korn Ferry, suggests asking a simple yet direct question: As you look at people with whom you've worked, what kinds of skills and experiences have they had and which ones have been most successful?

In answering that question, a job candidate learns if the boss prefers working with a self-starter or someone who takes direction; a team player or someone who works independently; a workaholic or someone who paces him or herself. It also indicates whether he or she is mainly interested in numbers or employees' learning and the quality of the product. That way the job candidate knows if his or her skills and work style mesh with the potential manager.

Anyone who feels uncomfortable asking this should remember that tone of voice is everything. Deliver the question in a conversational tone and it will come across as genuine and nonconfrontational...'