All that glitters is Gold 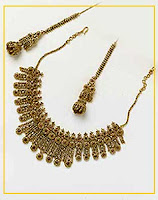 In India, Gold is not just used as jewellery but is also considered a safe investment. The appetite for gold is so strong that almost half of what all the mines in the world produced during a quarter is bought by Indians. TOI reports that global demand for gold, which hit an-all time high during April-June quarter, was driven by Indians. They bought 317 tonne or 3.17 lakh kg of this much-sought-after metal.

During last quarter, a strong currency leading to a fall in gold prices in rupee terms, a booming economy putting more money in buyers' hands and a successful festival season - all combined to a 91% rise in demand for the yellow metal in India, the latest report by World Gold Council (WGC) noted.
The report also pointed out some emerging trends in India, the single-largest market for gold. It is not only the demand for gold jewellery that pushed total demand. WGC data showed that Indians are lapping up gold even as an investment option. During the quarter under consideration, investment demand for gold in India nearly doubled to about 77 tonne, compared to 89% jump in demand for jewellery at 240 tonne: both all-time peak levels.
Demand for gold in India is expected to pick up ahead of traditional Hindu festivals, it has been reported. According to Reuters, the Rakhi festival which takes place on August 28th marks the beginning of a series of Hindu religious events that continue into November and sees gold demand rise to a peak. Analysts said gold prices could top $700 an ounce over the next three months from $670 now, but this was unlikely to dent demand in India. Nearly 80 percent of India's annual 800 tonnes gold consumption is for jewellery, which is also a form of investment in villages where people do not have easy access to banks.
Email Post