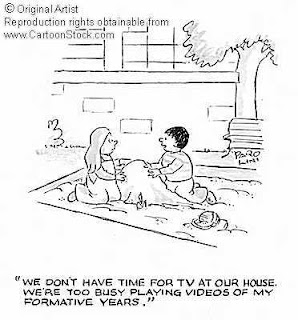 A survey by researchers at the University of Washington, just published in The Journal of Pediatrics, has found that for every hour of baby-video viewing per day, children ages 8 to 16 months knew six to eight fewer words than those who watched no videos. Videos are indeed being shown in many households with young children. And yes, some parents mistakenly believe that the videos are going to ratchet up their children’s I.Q. But watching hours and hours of baby videos is not the norm.
Only 17 percent of 384 babies in the survey were put in front of videos for an hour or more each day. The average baby watched only about 9 minutes a day. Data from the Kaiser Family Foundation suggests that the national average may be a bit higher — about 13 minutes a day. And babies’ total screen time, including television, DVDs and even computers, according to Kaiser, is higher still — about 49 minutes per day. But the alarming finding from the University of Washington survey applied only to baby videos. Television time, in contrast, seemed to have no effect, good or bad, on babies this young.
Most video content is nearly meaningless to babies less than a year old. (Though there is some evidence that they can imitate on-screen actions, it isn’t until they reach 18 to 24 months that they really start to comprehend what they see.) What matters is context and the child’s developmental needs. Parents who think about context make sure that videos don’t become a substitute for happy moments of interaction and play. They still take their babies to the playground, build towers with them on the floor and read to them. Many studies, including the new one about baby videos, show that a daily dose of reading helps with language development. It doesn’t take a degree in rocket science to realize that babies need the social interaction that comes with reading — the pointing and labeling, the back-and-forth conversation. Children left alone to watch objects flashing on the TV screen aren’t getting that.
Email Post