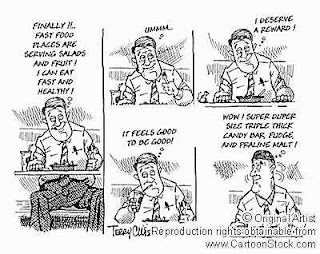 Would an adult buy a can of Coke sans the familiar red and white markings and the logo? Again, would it taste the same, should the buyer drink it, if it came off the same unmarked can?

Interbrand - Businessweek Global brand survey puts Coca Cola right at the top, valuing the brand at $65,324 million. McDonalds, ranked No. 9 is valued at $29,398 million. According to William Dillon, associate dean for academic affairs and Herman W. Lay Professor of Marketing and Statistics in SMU's Cox School of Business, Coca Cola's greatest success comes from selling its brand. In fact Prof. Dillon's work in branding demonstrates that a consumer will pay extra for a cup of Starbucks coffee simply because it's Starbucks, and not because the product is intrinsically better. On the other hand, if consumers believe that Starbucks uses a higher-quality bean, or that its brewing methods produce a better-tasting coffee, their choices are based on the product effect – a perception that Starbucks coffee is fundamentally better than that of its competitors.

Now what's true for adults is true for kids too. A new study finds that most 3- and 5-year-olds who taste-tested a variety of foods said they preferred the ones in the McDonald's wrapper, even though the foods were exactly the same. The study suggests that, like adults, young children are highly influenced by branding, experts say.

The study was led by Dr. Thomas Robinson, the director of the Center for Healthy Weight at Packard Children's Hospital and associate professor of pediatrics and of medicine at Stanford University School of Medicine, in Stanford, Calif. His team had 63 children, ages 3 and 5, sample five foods: chicken nuggets, a hamburger, french fries, baby carrots and milk. The chicken nuggets, hamburger and french fries were all from McDonald's; the carrots and milk were from a grocery store. Each sample was divided into two portions: one wrapped in a McDonald's wrapper or placed in a McDonald's bag and the other in a wrapper without the McDonald's logo. After taste-testing, the children more often said the chicken nuggets, fries, carrots and milk wrapped in the McDonald's logo tasted better, even though the foods were exactly the same.

Further research revealed that one-third of the children ate at McDonald's more than once a week, and more than three-quarters had McDonald's toys at home. In addition, the children in the study had an average of 2.4 televisions in their homes. More than half the kids had a TV in their bedrooms.