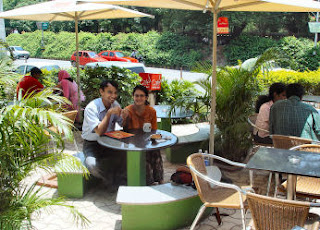 'Keep it simple, Keep it quick', seems to be the mantra that indigenous Food and Beverage outlet chains are latching on to, in India.

The reason behind the success of providing value for money quick meals is simple. That's what the mass consumer wants. Most sit downs are pricey in India and that dissuades the middle and lower middle class from frequenting them. In fact eating out in such pricey places is a rare indulgence practiced maybe just once a week or even less.
But now, most food and beverage outlet chains are introducing 'value of money' meals expecting footfalls to increase as a result. There's a strong possibility they will. The idea is to get people gorging on street fare to sample the fare available at a branded food and beverage outlet without it burning a hole in their pockets. Nirula’s, the Delhi fast food chain founded in 1934, has embarked on a national expansion plan to bring its menu of curries, pizzas, and mutton and veggieburgers to other cities in India. India's cafes too have expanded their menu fare to include biriyanis, kathi rolls (wraps) and other light Indian fare.
Pic : http://www.andreas.com
Email Post