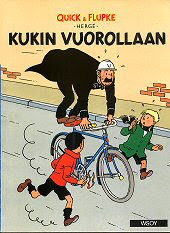 From IE : While Tintin, the cutesy boy reporter, acquired iconic status, two trouble-making street urchins of Brussels were abandoned and their antics remained mostly unknown. But this November, in the birth centenary year of their creator Georges Remi, popular by his pen name Hergé, Quick and Flupke will be rolled out in a 12-volume series of comics for the first time - from India.

In fact, to start with, the series will be available only in India, which is known to have a phenomenal Hergé fan-following — the books will be priced Rs 199 each. The cartoon series is about two goofy boys who unintentionally cause trouble much to the annoyance of their parents and the police — it had a parallel run with Tintin in the Le Petit Vingtième for nearly a decade.
Email Post