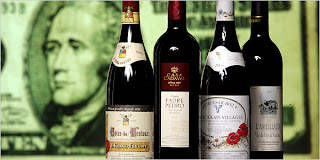 From NY Times : For most consumers, wine-buying is an emotional issue. The restaurant industry has a longstanding belief that the lowest-priced wine on the list will never sell. Nobody wants to be seen as cheap. But the second-lowest-priced wine, that’s the one people will gobble up.
Buying retail is a slightly different experience. Most people don’t feel as if their retail purchases are windows into their ignorant, miserly souls, the way they do in restaurants, and so are less inhibited. Still, rationality doesn’t often enter into buying decisions. For some, money is meaningless, whether that’s true because of huge credit lines, daddy’s millions or success in business. These people will buy whatever is most expensive. Others, in a vinous form of anti-intellectualism, insist that no wine can be worth more than — pick your figure — and that only dupes will spend more.
Whichever the case, the issue of value — the ratio of quality to price — rarely enters into it.
Wines with the small Price Tag :
Casa Cadaval Portugal Ribatejano , $8.99, ***
Domaine de l’Ameillaud France , $9, ** ½
Viña Gormaz Spain Ribera del Duero , $9, **
Georges Duboeuf France , $9, **
Altas Cumbres Argentina Mendoza , $9, **
Wyatt California Cabernet Sauvignon 2005 , $10, **
J. Vidal-Fleury France , $10, **
Domaine Monte de Luz , $7, **
Ravenswood California Vintner’s Blend , $10, **
Paringa , $9, * ½
Pic : Tony Cenicola/The New York Times
Email Post
Labels: Wine Buying Behaviour