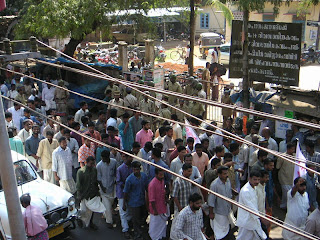 God’s own country now requires God’s immediate intervention. Once hailed as a ‘model’ state, today Kerala is not a model worth emulating. The most literate state in country through decades of ‘socialist’ policies ensured that Industrial value creation through products and services was never encouraged or supported and if ever a brave soul did try 'something', militant labor ensured that it was shut down in the blink of an eye. This resulted in countless migrations to cities across India and across the world.

NY Times Story; Plagued by chronic unemployment, more Keralites than ever work abroad, often at sun-scorched jobs in the Persian Gulf that pay about $1 an hour and keep them from their families for years. The cash flowing home now helps support nearly one Kerala resident in three. That has some local scholars rewriting the Kerala story: far from escaping capitalism, they say, this celebrated corner of the developing world is painfully dependent on it.
“Remittances from global capitalism are carrying the whole Kerala economy,” said S. Irudaya Rajan, a demographer at the Center for Development Studies, a local research group. “There would have been starvation deaths in Kerala if there had been no migration. The Kerala model is good to read about but not practically applicable to any part of the world, including Kerala.”
Local lessons would matter less if this were a section of Mexico or Manila — places known for the hardships that make migrants flee. But Kerala’s standing as the other way — the benevolent path to development, a retort to globalization — makes the travails of its 1.8 million globalizing migrants especially resonant. The debate about Kerala is a debate about future strategies across the impoverished world.
Read the complete article, here.
Pic : www.wikimedia.org
Email Post
Labels: Development Model Economy Kerala