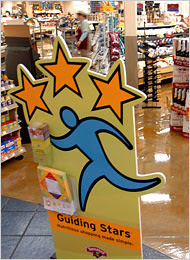 NY Times : A grocery store chain based in Maine declared success yesterday for a year-old experiment in using a rating system to direct customers to healthier food items.

The chain, the Hannaford Brothers Company, said that the program had a major impact on steering purchases in the expansive packaged-food section of the store, including cereals, soups and breads. The system that Hannaford developed, called Guiding Stars, rated the nutritional value of the grocery items in the store on a scale of zero to three stars, with three representing the most nutritious products.
After analyzing a year’s worth of sales data, Hannaford found that customers tended to buy leaner cuts of meat. Sales of ground beef with stars on their labels increased 7 percent, and sales of chicken that had a star rating rose 5 percent. Sales of ground beef labeled with no stars dropped by 5 percent, while sales of chicken that had a zero-star rating declined 3 percent. Similarly, sales of whole milk, which received no stars, declined by 4 percent, while sales of fat-free milk (three stars) increased 1 percent. Sales of fruits and vegetables, however, remained about the same as they did before the ratings were introduced. All fresh produce received stars.
Story/Pic : www.nytimes.com
Email Post
Labels: Grocery Health Nutrition Retail