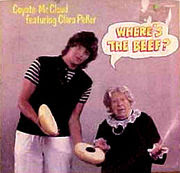 The now running communication campaign by Coke’s Orange pulpy, ‘Where’s the pulp’ is modeled after the successful Wendy campaign, ‘Where’s the beef?’

Though similar in nature, in reality, the differences are stark. Wendy’s campaign focused on letting the consumer know that the beef patty in their burgers was truly chunky with lots of beef unlike its competitor’s patties, where the beef content seemed to be shrinking. The Campaign went down well with consumers as they agreed to the Wendy’s observation about shrinking beef content in burgers and it then led them to wanting the Wendy burger which they believed did not shortchange them, when it came to 'beef'.

Orange Pulpy’s campaign has some similarities. It draws consumer’s attention to the fact that Orange Pulpy is the drink with fresh orange pulp unlike other juice drinks which obviously don’t have pulp, thus are not the ‘real’ juice. The idea behind the pulpy campaign has indeed differentiated Orange Pulpy from other juice based drinks. And at the moment it seems to be getting the attention of the consumer at least when featured on TV screens with a catchy tune.

But would this translate into actual sales in stores?

Now that remains to be seen. What’s interesting to note about juices on supermarket shelves is the lack of differentiation among them. It’s the classic case of commoditization of brands, i.e., one juice brand is so similar to the next, there’s no difference. They have almost turned back into commodities.

In such a scenario what would the consumer do? At least in most supermarket type stores in India, promotional offers on view will dictate shopper’s choices. Take Big Bazaar for instance. Just today, the number of promotion offers from juice brands included Orange Pulpy, Dabur’s Real, Parle’s Frooti and Leh Berry. The promo that was scoring points with consumers? Dabur’s offer, where a shopper could have 1 litre of Real Orange (MRP-Rs.72) and 1.2 litre of Real Mango & Pineapple (MRP – Rs.42) juice at a price of just Rs. 72.

What’s clear is, trying to differentiate a juice drink based on some characteristics works in drawing attention to the brand. But what gets it move off shelves is competitive pricing, especially when it’s a scene of commoditization of juice brands. Coke’s done well to price a litre of Orange Pulpy at Rs. 60. Its forced Pepsi with its Tropicana brand to get off the premium price perch down to Rs. 60. But Coke needs to also manage the cut throat promotion runs by competing brands which promise to give greater bang to the consumer’s buck.

Ashish Virmani said…
btw minute maid pulpy orange is not a juice...its a drink..if u see the fine print on the label...it say orange 'beverage' and not orange juice...its just a strategy to befool the ignorant indian consumer...
Sep 17, 2007, 11:17:00 AM

You are right in saying that Pulpy Orange is not a juice. In fact Coke terms it a 'juice based' drink. The pulp and other ingredients used in the drink, for now, is being imported from Florida and Brazil with plans of manufacturing the same at Coke’s Chittoor plant in Andhra Pradesh going forward.