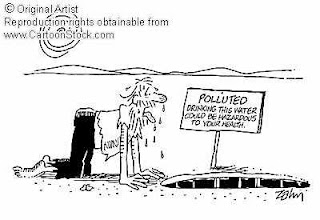 There's this interesting scene in the drama series, West Wing, where the President (Charlie Sheen) reacts angrily to the hatred expressed by some people over his daughter, Zoey (Elisabeth Moss) dating Charlie (Dule Hill), wanting to defend their rights and privacies. The President's advisors tell him not to react, as that would raise the decibel levels about an issue, that should best be left quiet.

The lesson in this story is one that PepsiCo. India can learn. Recent reports seem to suggest (note : no official confirmation on the same as yet) that the soft drink company in India plans to release a communication campaign featuring its CEO, Indra Nooyi and the way she spent her childhood. The communique would show how Ms. Nooyi as a child used to get up early in the morning to fill buckets of water, as water was a scarce commodity those days. The campaign centers around her middle class upbringing with issues such as 'water' thrown in.

Is water a sensitive issue in India? You bet it is. With access to clean water still a luxury among large sections of people in India, it is quite the 'burning' issue everywhere. Take Bangalore, for example. Right now, with three days of water cuts, due to a pipeline repair issue, Bangalore is parched. Tempers are running high.

In the midst of it all, any reference to 'water' by someone like PepsiCo, far from getting people to believe in the company's concern for this precious resource, will only bring back memories of how Soft Drink manufacturers in India have been responsible for destroying underground 'water tables' around the country. Remember Plachimada?

For the moment, the smart thing to do? Yeah, CSR is important, but don't let it bring back sour memories. Steer clear of anything that can touch a raw nerve. At times, its better to stay put, stay shut.