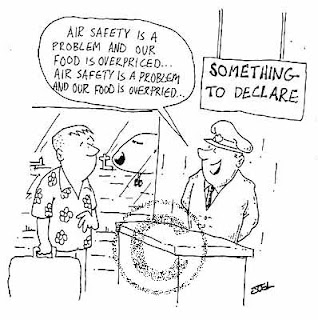 As a part of the Air Safety week, the Ministry of Civil Aviation has released full page print Ads in leading newspapers. The Headline asks, 'Is the thought of 'human error' making you lose your appetite? Just read further and you will feel much better today.'

The Ad goes on to say, 'Relax. Our pilots and Air Traffic Control Officers undergo the highest levels of training.....'

The ad then concludes that Indian skies are 'one of the safest in the world'. Its understandable the need for this campaign. Indian air travellers have been frightened out of their wits over the recent 'near-miss escapes' in our skies. Thankfully no major mishaps have yet taken place, except for the one involving a Saudi Arabian Jumbo and a Kazhak Airlines plane.

A consumer's involvement with a product or service is primarily dictated by the risks associated with the purchase. These risks in turn could be driven by financial, health, physical, social or emotional factors. In the case of air travellers, the involvement levels with the service provided would be among the highest, on factors of safety. After all, no traveller wants to ever fly with the fear of a mishap hanging over his head. So, the campaign definitely helps in assuaging fears. But what would help more is if there are no more reports in the media about these 'near misses'. Or may I say, if there are no more of the 'near misses'!
Email Post
Labels: Air Travel Consumer Involvement

Sandy said…
I am not too sure if Indian skies are the safest as the Ad claims.To be honest, I dont think the Ad hits home at all.(personal opinion)
However I do agree with you when you say that involvement with a service provided is highest,on factors of safety.
Maybe something like the Virgin safety video would go a long way in comforting people rather than an Ad which just states something which not many think is true.
http://www.youtube.com/watch?v=eyygn8HFTCo&eurl=http://blog.pokenewyork.com/?p=278
Dec 14, 2007, 5:46:00 PM