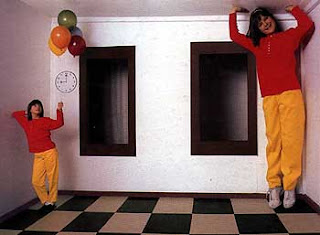 Daniel Kahneman's Prospect theory focuses on how human beings view decision-making. Kahneman suggests that human beings have perceptual weaknesses built into their cognitive structure. Decision making can be intuitive (system 1) or reasoned (system 2). The degree of interaction between the two can result in changes to the way people make judgements and decisions.

In the Ames Room experiment, Kahneman looked at perception from perspectives that he referred to as 'intuitive' and 'preference'. The former happens almost automatically and is difficult to control and change - for example, the eye tells a person that the room is rectangular, but the latter involves reasoning, judgement and control - the person knows that the room appears rectangular but in reality it cannot be because the visual cues - the children in the room - suggest something is wrong.

How much of the intuitive versus reasoning perspectives of perception have to do with high price making wines taste better is anybody's guess. A recent research study by a group of scientists at the California Institute of Technology discovered that people given two identical red wines to drink said they got much more pleasure from the one they were told had cost more. Brain scans confirmed that their pleasure centres were activated far more by the higher-priced wine.

The findings could help to explain why rich diners are often willing to pay thousands of pounds for a bottle of fine wine. It seems much of the real pleasure is generated by the high price paid rather than by the quality of the vintage. Evidence that factors unconnected with the intrinsic qualities of a product can be manipulated to make it more attractive have huge implications for all retailers, not just restaurateurs.