The hypocrisy in blaming a marketer 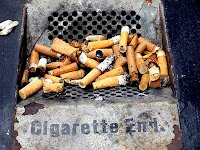 I wonder why it must always be the marketer who takes the heat? Well, this case is about kids taking to smoking.

A recent Indo-US study, conducted in Delhi and Tamil Nadu which included 11,642 sixth and eighth graders, found that nearly 50% of the kids had seen and remembered a tobacco advertisement. Current use of tobacco was five times lower among students who had not watched tobacco promotions.
According to the study, published in the May issue of the 'American Journal of Health Behaviour', which shows a clear connection between exposure to surrogate tobacco ads and consumption, cigarette companies are now trying to tap the youngest population by falsely associating use of tobacco products with qualities such as glamour, energy and sex appeal.
Sure, some marketing communication can be deemed irresponsible and may even be to blame for a kid's wayward ways. But what about the responsibility that rests on others? Say for example, parents whose lives have a major impact on their kids' behaviour? What about institutions like schools and colleges where they congregate for a major part of their growing lives and the peer pressure they are subject to, in such places? What about the societies they live in and outlook they have towards teen issues?
Its easy point the finger at the marketer. In fact it almost absolves everyone else of their own responsibilities. And that, dear, is what's termed, 'hypocrisy'.
Pic : http://moblog.co.uk
Email Post
Labels: Irresponsible marketing Smoking Teens tobacco consumption