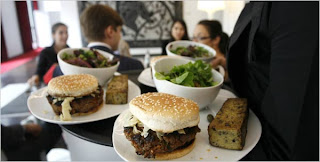 Burgers turning chic is not just about rewriting gourmet culture, its pure 'social revolution'. For long we have witnessed snobbish European ways, with the French leading the snob march. Cuisine was a definite participant in this way of life. But then came the burger.

Then came the Americans, breaking down everything that everyone else called 'cultural identity'. It was easy for the Yankee as he had no cultural baggage that he lugged along. So he rewrote culture with a language that tell then, didn't exist. What followed was an avalanche of products and services which the rest of world, tired from the stifling effects of their cultural identity, consumed, with a vigour and an appetite that still shows no signs of receding.

Look around, I mean India, denims, burgers, sneakers rule (Yes, I know its still metro-centric, but give it some time...). In fact they have 'liberated' the Indian consumer. 'Chic Burgers' in their true sense, represent rebellion. A rebellion that must have marketers salivating. For markets around the world await products and services that break down cultural rules. A note of caution. The process meets with resistance from the culture-keepers. But its power is too strong. The path of least resistance (read, customisation) is the path in.