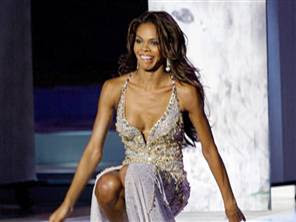 By now most people know that Miss Venezuela has been crowned Miss Universe 2008. And that Miss USA tripped and fell, and that its happened now, two years in a row.

But will people remember which of the contestants made it to the final five? Just for the record, that included four from Latin America: Miss Mexico, Miss Dominican Republic, Miss Colombia and Miss Venezuela. Rounding out the final five was Miss Russia. I bet no one's gonna remember the 'final five'. That's one of the immutable laws of Marketing. Its better to be No. 1. No one remembers No.2.

Let me now tweak the law a little. Its better to be No. 1 or even better to trip and fall. 'Cos every one's gonna remember Miss USA just because of that fall. And the poise that continued on her part. She got up and walked on, dignity intact. Now that's something people will speak of. The fall and its aftermath.

If brands don't have a chance in the sun to be No. 1, its better for them to be in the news for something that they would be admired for. People remember incidents that are 'slices of life'. Brands that falter at some point must use that 'opportunity' to pick themselves up and connect at a level where they earn the consumer's empathy. Surely every one's fallen, picked themselves up and moved on.

Oh and yes, should brands do that they will be remembered. Doesn't matter even if they aren't No. 1.
Email Post
Labels: Brand Image Miss Universe contest

Ashutosh Sundaram said…
Hi Sir,
I agree. Just like they say, if you cant convince the customer, confuse him. Cause if you think the customer's not gonna buy your product, let him, in all probability, not buy a competitor's product as well.

Memory is very selective in nature, people will remember what they want to and forget what they dont want to. Remembering brands, for instance, depends on the involvement of the customer in the category concerened. If a golf addict is making a purchase of a golf club, then he might remember the brand, no matter how successful it has been or not. That's because the customer knows what is important for him/her, what works best or what does not work good for him, because he is passionate about it. On the contratry, if it's a weekend golfer, then he/she might go with the "World's Best Club" tag and make the decision.