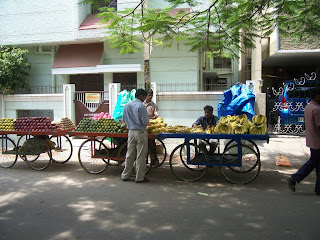 One of the reasons as to why unorganised small time mom n pop retail stores in India will survive is their ease of accessibility. There are many a times when households engage in emergency grocery purchases, most of which is done at mom n' pop retail stores in their immediate neighbourhood. Also, the lack of real estate acts as barrier that stops retail biggies form entering such neighbourhoods.

To get around the the problem of not being able to penetrate neighbourhoods with their stores, Britannia has now launched pushcarts to deliver deliver fresh food products, especially breakfast items, at consumers' doorsteps. The push carts will ply inside a number of localities everyday and carry Britannia products right from bread to biscuits, rusks, cheese and cakes. The pushcarts would also benefit residents by carrying exclusive offers and announcements, displaying new product launches.

Pushcarts are going to get their act right only if they get their timing and their assortment right. Take for example, bread. Most households would require this product often. They may either buy it as part of their big store grocery purchase or from a neighbourhood mom n pop store. But due to its frequent requirement, the pushcart availability may just suit them fine, especially since it would be fresh everyday. But what about the problem of being presented with just one brand of bread? Would that matter much to the consumer? What about the assortment? Plus would I have a cart around, I can buy from, when I run out of bread? The timing thus becomes critical. As much as the cart's mobility is helpful to the consumer, that turns into a problem, as the cart would never be found at a fixed place at a time when the consumer wants, to make an emergency purchase.

The carts definitely will help consumers tide over the 'place' problem. But will they be something that consumers rely on, remains to be seen.
Email Post
Labels: Britannia Pushcarts Retail distribution

Ashutosh Sundaram said…
Convenience is still the keyword and will remain forever. Every consumer would want to keep things as convenient as they can...
Aug 3, 2008, 6:51:00 PM