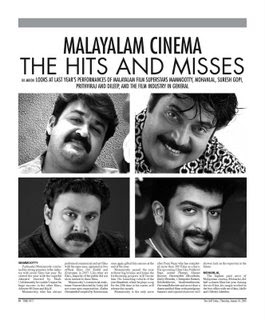 There was a time when Malayalam cinema connected with its audience in Kerala. This was a time that squeezed itself in between an earlier time where movies were more or less sickly sob stories and a latter time where slapstick airhead fares ruled the roost. I am sorry to say that this the latter time.

I miss those movies. There were perfect in the sense they presented a story which was thought-provoking, heart warming and yet lightened with sensible comedy, so the depressing after-ache never materialised, never lingered.

That movies that get it right are the ones that get this 'balance' right. Makes you think, yet not to death. Take for instance superhero movies from Hollywood. Vir Singhvi is right when he says, 'It can be no accident that Nolan’s 'Batman Begins' was less about the Caped Crusader’s adventures in the Batcave and more about Bruce Wayne’s attempts to reclaim the legacy of his murdered father. Studios have learnt that children will watch anything. But for a superhero movie to earn back its investment, it needs to appeal to adults as well. And adults want grown-up stories and serious themes.

Of course you could argue that any film about a man who wears his underwear outside his trousers—as most superheroes do—can never be truly serious. And you’d be right. The charm of superhero movies is that they take the adventure stories and fantasies of our childhood and update them so that we can see the characters we grew up with facing the kind of adult problems that trouble us in our daily lives.'