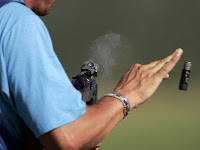 Abhinav Bindra won India's first ever individual Olympic gold medal when he claimed the men's 10m Air Rifle shooting title. In one of the most thrilling shooting finals in Olympic history, Bindra overcame a two-point deficit against Hakkinen and one point against Zhu after the qualification rounds to annexe the title.

Abhinav's feat has done India proud. In addition it will do something else that no other can. For once, its shut up, cricket!
Three cheers to that!
Pic: http://www.rte.ie
Email Post
Labels: Olympic Games