The 'next level' in Coffee; can a lot still happen? 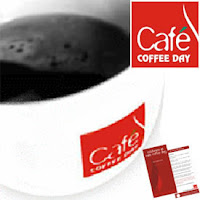 Sure it can. In fact, the fact that it can, is universal.
And that is why Cafe' Coffee Day has retained its 'catch-phrase' as it takes its format to the 'next level'. It has also retained the Cafe Coffee Day name. Though I don't see the name as being 'classy' in its appeal, there's nothing in it that makes it unsuited to whatever it is that they are calling the 'next level'. Plus the strong equity that it brings along makes the usage pertinent and almost necessary.
Everything else that makes Cafe Coffee Day what it is in India, undergoes a change. The change is hopefully what the company believes will take it to a higher level. The change will include the ambiance, look and feel inside the cafes. The focus will be on projecting a feeling of togetherness and celebration, something which the CCD brand-architecture study identified as their core values. The togetherness identified, could be friendship, romance or even an office meeting in an informal environment.
The important issue to note is how CCD's loyal audience reacts. Its only obvious that the change will bring in its wake a rise in prices. My bet is the audience wouldn't mind the price rise, if it happens. And even if some did, they wouldn't be substantial enough to raise eyebrows.
Here's wishing CCD luck with its 'next level'.
Email Post
Labels: Brand Repositioning Cafe Coffee Day

Unknown said…
it is really pity that companies communicate in their store that they would like to have feedback esp about any bad exp's. but unfortunately none of these co.'s are serious when they write this. CCD is no different. recently, I had bad exp in one of CCD outlet alongwith my friends.the ac was not working & inspite of my repeated request to switch on ac i always got diff. answers. sometimes ac is already on, ac is not working etc. the answers were not convincing.I finally decided to write it to person at HO.I got reply that we are looking into matter and standard sorry!

It seems like the people at HO simply wants to save their ass with std reply without having any empathy or feeling for customers.I never heard again from them.looks like their gaive a damn to customers. I think this attitude is prevalent in many of companies.

today none of us friends visit any CCD outlet!why should we? having a bad exp at the outlet followed by cold treatment from corp. office is surely a dampener.
Aug 1, 2008, 6:35:00 PM

Unknown said…
About cafes, just today, one of my friends told me about this place called- BREW HAHA (brewhaha.in). They have positioned themselves at an all new level- 'Dinner with a dose of fun'. Here's a cafe that provides a menu of games along with a food and coffee menu.

Brew HaHa was set up by an IIM A'bad Grad. I believe it is a fantastic idea. I've just heard about the place and I so want to go there. Lets see if i can convince my husband to go there. Times of India calls it - 'the coolest place to hang out in Koramangala'. This cafe should be such a huge relief from the boring malls and foodjoints. Now I've got to try out the place and see how the experience actually is.
Aug 1, 2008, 6:58:00 PM

I THINK WITH THIS NEW CHANGE, CCD CAN ATTRACT NEW CUSTOMERS AS WELL AS THEIR EXISTING LOYAL CUSTOMERS.
NO DOUBT, CCD HAS THEIR BRAND IMAGE BETTER THAN ITS OTHER COMPETING BRANDS OF COFFEE IN INDIA.THE AMBIENCE OR THE ENVIRONMENT WE GET IS NOT MATCHABLE WITH BARISTA (ITS MOST LIKELY COMPITITOR).
A CLASSIC SUCCESS IN THIS GENRE,IS COCA-COLA.IT NOT ONLY BECAME A BRANDNAME TO BE REMEMBERED BUT A PRODUCT IDENTIFICATION. BUILDING ON THE INHERENT VALUES OF A BRAND SHOULD BE THE CORE OF ANY BRANDING STRATEGY.SO IF CCD IS BUILDING ITS VALUE THROUGH ITS 'NEXT LEVEL 'STRATEGY, IT WILL CREATE WEALTH ,I THINK SO BUT NOT SURE.HAAAAAAAAAAAAAA....
LETS HOPE FOR THE BEST....
Aug 2, 2008, 12:21:00 AM

Deeptaman Mukherjee said…
Aparna is very right in mentioning about Brew Haha as a very kool coffee joint .. I myself have been to this place in kormangala.
The USP of this place is koffee with fun. This place apart from having coffee tables has got a few seating arrangements on the floor with pillows and well decorated mattresses .. It also has a list of games which u can order and play if you have a group with you. Once you order the game you want to play, you would get the required things necessary to play the game and the charges are very normal as Rs 100 per hour per game ..
Ambience wise .. its much better than CCD.
Aug 3, 2008, 3:46:00 PM

Ashutosh Sundaram said…
Thinking about why CCD would not change it's name is because "CCD" is now a parlance. Everyone is supposed to know it.

and what is different at CCD compared to Barista is the kind of crowd it attracts. I have seldom heard people meeting over for formal meeting at a CCD. Corporates prefer Barista over CCD for formal meetings like interviews. The concept of hanging out with friends is the soul of CCD and I guess changing everything but the name has a reason behind it. Whether they succeed or not is something we have to wait and watch. What's in a name, I guess a lot if perceived and nothing if analysed.
Aug 3, 2008, 6:02:00 PM

Why am I not surprised...service is just not up to mark, even at high end retail formats....

The true test for Brew haha is in chaining successfully and ensuring they engage consumers without a hint of boredom...the latter is the problem that CCD faces...Consumer fatigue has set in...

Plus, hope you can take the Mister to Brew haha :)

The larger challenge for CCD would be getting new consumers to buy into their proposed format while at the same time ensuring that their regulars are not alienated.
Aug 4, 2008, 2:23:00 PM