The Times are with the times 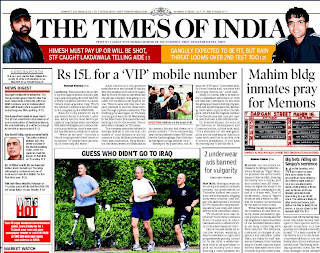 The Times of India proudly proclaims on its front page that they have now crossed 4 lakh in circulation in the city of Bangalore alone. Kudos to them. The TOI has proven what a brand must do to turn into a truly mass brand.

Part of TOI's strategy stems from dumbing down content so as to attract the masses who don't just want news, they want to be shocked, numbed, titillated and even at times humoured by what they read. The TOI in fact provides it on a platter to them, every day without fail. Contrast this with the Hindu. A paper, sought after by the intellectuals. A good example of what can be termed as the Hindu's conservative approach is seen when you search for its online site. The words that greet you are, 'republication or redissemination of the contents of this screen are expressly prohibited without the written consent of The Hindu'. That's a surefire guarantee of never turning a mass brand. Because the last thing you would want as a mass brand is to stop people from using you. The Hindu should have been inviting people to use their content wherever they thought it fit for use, only asking in return, credits for the same. Instead they turn up their nose. Now you know why they can't ever be what the TOI has turned out to be. I can understand the Hindu wanting to be a niche brand. But my guess is, keep at it and you will fold up, never mind the Mylaporites.

As Thomas Sowell called it, this is the 'Gratingest Generation'. He states, If our era could have its own coat of arms, it would be a yak against a background of mush. This must be the golden age of endless and pointless talk.

Now you know why the Times are with the times.
Email Post
Labels: Mass Brand Newspaper circulation Times of India

Ravi Chaitanya said…
Times may be as of now with the Times but till what time will this last???? Providing masala other than news can bring subscription but is this groth sustainable??????? If you ask me I will say NO I may not be a person who is conceptually sound but sheer logic drives me to give an answer in the negative. If Tomoro DC gives me masala the readers of TOI will shift......

The hindu however will have its base intact... People who look for REAL NEWS will read the HINDU...

It is better to be a Category killer and stay alive rather than killin your brand with short term stimulators...

The Copying masala part is as applicable to REAL NEWS too....

Unknown said…
I would admit I'd rather read Times than Hindu. But the fact about TOI is that they tend to sensationalize news, whereas Hindu gives plain simple facts. That is what the brand Hindu means to its readers, and these readers are their target market. If Hindu went the TOI way then whatever readers that it already has would turn the other way, or lose faith in the brand all together.
Aug 10, 2008, 8:16:00 PM

Unknown said…
TOI is a popcorn and The Hindu is like dal roti. I would like to have popcorn once in a while but food everyday. Too much popcorn leaves a bad taste and I don't have it daily.

Hindu is known for its simple yet strong facts and its for people who want News and not NEWS. Unless TOI keeps doing something like Lead India every now and then its going to be stale. I thin the point about DC by Chitu is going to work.
Aug 10, 2008, 8:38:00 PM