The lesson in the desire for Dzire 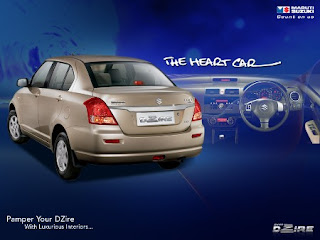 Though Maruti Suzuki is struggling to keep pace with demand for its cheapest sedan Swift DZire, there's a lesson in there for marketers. According to market sources, the booking orders for Swift DZire have been piling up, resulting in a waiting-period of over six months for the model.

Swift DZire represents 'value for money' for the consumer segment that wants to graduate from the 'Santro' type car mid-segment small car to the next level. Swift DZire drives value at two levels. Its a Sedan. Note that driving a sedan raises the status level for this set of consumers, wanting to graduate from a lower level 'small' car. Two, that Sedan status doesn't burn a hole in their pockets. At 4.49 lakhs, its quite the buy.

Swift Dzire drives value at a psychological and at a function-price level. That's an winning combination. A combination that's become an imperative in these recessionary times. No wonder there's a waiting period for a the Swift Dzire brand, when most other car brands are looking down the barrel.
Email Post
Labels: Brand Value Consumer Demand Maruti Suzuki Swift Dzire

Unknown said…
I agree broadly with your view that the model "...drives value at a psychological and at a function-price level." I contend that the same methods used by Tata (i.e. Indica to Indigo) has evoked the same scale of response. It is now for Hyundai to provide its retort in the form of i20 model.
Oct 7, 2008, 6:49:00 PM