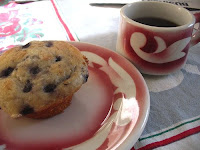 Reuters: Australians are anxious to know if they will avoid recession and are turning to some unexpected, unofficial economic indicators to find answers. Unconvinced by official data, which are sending mixed and sometimes dubious signals, pundits are instead turning to everything from muffin sales to home-brewing kits. Even economists and the central bank are being forced to play private detective and rummage through the rubbish bin of economics in search of important clues...
But the real harbinger of recession -- known as the "muffin effect" in alternative Australian economic theory -- is far from conclusive. Muffin sales appear to be holding up. Advocates of "the muffin effect," as it was dubbed by the Australian Financial Review recently, believe that when the economy slams into reverse, office commuters deny themselves their usual muffin with their morning cup of coffee.
Email Post
Labels: Muffin Effect