The 'obscene reality' that Roadies is! 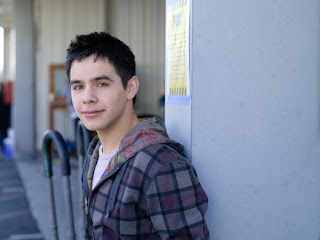 The eighth season of American Idol is round the corner. And this time too, I think we're gonna see talent. My last 'Weekend pick' featured David Archuleta, the baby faced kid who has a hit on his hands. Others too, from Idol, have had great careers in the music business.

Why I bring American Idol up, is 'cos last week, flipping through my TV channels, I came across MTV India which had this program called 'Roadies' on. The few minutes I stayed on the channel had me listening to this bald guy with a goatee mouthing obscenities at contestants who I guess were dying to be on the show. The 'bleeped out' profanities shocked me. Three things struck me right away. One, Why would anyone put themselves (incredibly low self esteem, perhaps?) through a session of this kinda bashing? To be on a pathetic show? Two, this acute show of 'abuse' was actually being enjoyed by a substantial viewer segment out there. Imagine that! Three, the baldie needed to be locked up!

Contrast what I saw on Roadies, with the treatment meted out by Simon Cowell, the incredibly popular judge on Amercian Idol. Know what's the difference? Simon rarely cusses, speaks with incredible dignity and is brutally honest. Have I liked Simon during his caustic times? No. But Simon shows the way when it comes to 'dignified honesty' that's so important for contestants who're trying to make it.

Wish the 'Baldie' watched Simon (maybe he does, but guess its too late for him to get it), and then, checked himself into therapy. It may not save the world, but it at least will take a sicko out of the way.
Email Post
Labels: American Idol MTV Roadies Reality Shows TV Show

Prem said…
Completely agree prof. but the ppl who enroll themselves for this r just looking for the 15 mins fame on national TV or some career in the media. Look at the prev winner of the show, he ended up winning Bigboss and Rs.1crore!!!!!
Dec 10, 2008, 10:56:00 AM

Unknown said…
The main idea of the show is to test the creativity and the attitude of the person, who has got the survival instincts. Who can play his/her game in his/her own way.
The interview round is deliberately acrimonious to test the participant's attitude, tolerance and patience levels.
An Indian version of ROAD RULES, this show has numerous blogs..forums..orkut themes and 4 million viewership in it's kitty!!!
And as far as Obscenity is concerned, the show is about confronting those remarks and not taking them. If all that is obscene then so is life and finally jst one sentence..IT SELLS!!!
Dec 10, 2008, 6:29:00 PM

Unknown said…
Good observation sir. Agree with you completely. Just imagine how sick the population watching this is and you should have seen the Spitsvilla
Dec 10, 2008, 7:24:00 PM

ABHISHEK SINHA said…
i agree with divya.... world is changing, so as the india... when it comes to obscenity, its evrywhere, take example of selling job of insurances.... so, its real... what u people dont like, is its public display.... but, its totally fair... as they are just facing the situation and not in defensive mode... so, they have to show attitude and should have to carry the killer instinct to face all that, if all this comes with a bit of obscenity, then its perfectly permissible.... this is what i feel....
Dec 10, 2008, 8:18:00 PM

Ray Titus said…
I guess then this is the genesis to the creation of a vibrant, creative, tough, tolerant Indian youth of tomorrow...

Oh, by the way, check out 'Survivor' (http://en.wikipedia.org/wiki/Survivor_Finale);

Kunal said…
hello sir,
i am Kunal Lodha (PGP - 1). i have been reading your blogs but could not stop myself from writing on this one. The baldie (Raghu) in discussion here has a huge fan following of his own. and roadies as mentioned by Divya has been a hit since its first year. what i wanted to tell here is that they not only show obscenities but also they have shown people been hit..slapped actually by the baldie...and they are ready to take it up jus for the fame they get here...its really sad to see many people in colleges and schools discussing this episodes jus for the sake of it...just to be among the peer groups..the show has nothing to offer but then..as mentioned earlier..it sells and people are buying it!!!!!
Dec 16, 2008, 1:47:00 AM

Thank you for your interest in the Blog.

That the show's got 'nothing to offer' is maybe why it sells. After all, there ain't many takers for intellectual stuff. :)