You the Latte' lappin' loser? 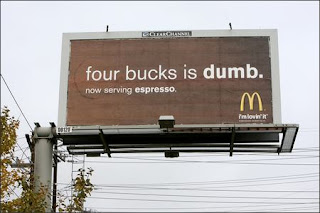 McD's has got the timing dead right!

By erecting a billboard in sight of Starbucks headquarters declaring, "four bucks is dumb", McDonald's has gone for Starbucks' jugular. The objective of the campaign is to change Consumer attitudes towards the Starbucks brand. And I think its gonna work. Lemme explain why.

Consumer attitudes comprise of three components, the cognitive which dictates brand beliefs, the affective that drives what the consumer feels about the brand, and the conative which in turn decides his attitude towards purchase. Starbucks' consumer segment surely 'feels' great about their beloved cafe and coffee. But the 'cognitive part' is where McD's intends to sow the seeds of doubt. Sure, I feel great about the Latte' at Starbucks, but when I start to think, is it value for money? Especially when I may lose that job of mine? When I know that the economy is hurtling into a downward spiral? When McCafes offer the same damn snobbish coffee at almost one-fourth the price?

The McD's campaign is aimed at turning the thinking consumer (or the thought-starved late-twenties early-thirties talking through his hat executive at that hot shot firm who's now being forced to think) away from Starbucks by telling him he must be dumb to pay that much money for a cup of coffee, for cryin' out loud. And I think in the present circumstances, its a compelling taunt that can hit home!

Rashmi Anand said…
I think this campaign will not fetch benefits as expected becoz the TG for both the brands are completely different. Mcdonalds main target has been kids all the time and Star Bucks have always targeted to business class and affluent people. People those wh go to star bucks dont go only for coffee but for the whole package(Location, ambience) it offers . Even though they are losing money in this downturn, they are not diluting their brand by costing it less. Its a fair strategy. But creative of the ad is amazing.
Dec 13, 2008, 11:53:00 AM

Unknown said…
I totally agree wid u sir! Starbucks sells experience but if I want coffee and I see a McDonald's, with no Starbucks in sight, I would not keep driving just for the experience sake esp in this recession!
So here Mc D again stands a chance coz itz evrywhr!!!
Dec 13, 2008, 9:33:00 PM

N' we are talkin' provokin' an 'attitude change' using a cheeky provocative communique that takes a cognitive route....

Unknown said…
Well, thats the marketers job to take it's target market from awareness to preference stage n the war is on..all v cn do is jst wait n watch coz it takes considerable period of tym to happen..after all as they say..Rome wasn't built in a day!
Dec 15, 2008, 6:26:00 PM