'Correction' is welcome, not the 'sentiment' 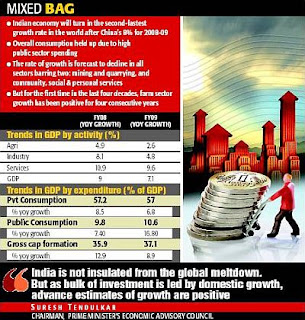 Sure, Devita may have point regarding the 'correction' that recession has brought into the 'frenzied global market place'. But to characterise the 'hyper-activity' as 'capitalist preening frenzy', at least in India, is taking it a tad too far.
Sure, again, marketers who made gross miscalculations, counting on a flood of consumers, may now have been hit on the heads with a dose of realism. But then again, those miscalculations are what rationalise prices in markets where they have hit the roof.
Just so that Devita knows, what she calls 'markets built on hype' aren't exactly the ones you see in a country like India. Private consumption is down, but not down and out. The decline in the rate of growth in private consumption is projected at 6.7% in the current fiscal from 8.5% the year ago (CSO estimates). That ain't drastic.
Also, Devita falls prey to the bias of 'representativeness'. That is, the assumption that the Indian urban buyer, works at an MNC or a Software firm, has had access to easy money and now is being forced to cut back on his shopping indulgences, is simply not true. That the average urban buyer surely could afford what he did in the past was simply because he worked at a company (MNC or otherwise) that sold whatever it is, to other Indian consumers. The salary he took home thus, was what he then went on to spend. And he spent it wisely too. In almost formats of retail, what's done well in India has always been the 'value-offer' from a 'value-seller'. Take cars for example, Its the 'Alto' that's always been the Indian No. 1, a true 'value for money' brand. Or FMCGs, the 'value for money' brands have come out trumps. Would that ever have been the case if the Indian Shopper had engaged in what's termed as 'indulgence'?
I fear the biggest fallout of this recession would be on consumer sentiment. People, cutting back on purchases, on speculating on a depressed economic future. That would be dangerous as it would then 'down' disposable incomes , down consumption and that cycle surely will lead to a catastrophe.
So instead of looking at the recession as a correcting mechanism, at least in India, it should be feared as a phenomenon that can depress consumer markets with repercussions that will send the economy into an even worse spiral!
Email Post
Labels: Consumer spending recession