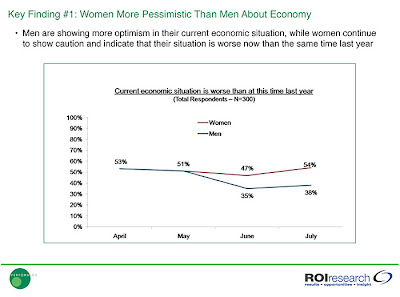 The pessimism that women sport may be due to their roles as Purchasers-in-Chief when it comes to household goods. The survey also found that 73% of women said the recession had fundamentally changed the way they think about saving and spending money vs. 57% of men.

Should the implications from the way women now think be worrisome to marketers? According to me, its a Yes and No. It should be worrisome to those who pitch their wares using messages that try and connect with emotions. These are trying times where women turn ruthless rationalists. No more 'Be More' kind of campaigns for them. They don't want to be any 'more' than what they already are. Instead what they are looking for is how they can spend less and get the same deal or even more. Marketers who can keep the grin on are ones that sell with a 'Value for money' pitch. Women will gravitate to such brands, as it means greater value for the same expenditure. It will make them feel the money was 'well spent'.

Its the likes of McDonalds, McCafes and Wal-Marts that can sit tight. If you are the Starbucks of the world, I'd say worry.