Consumers cutting back is global 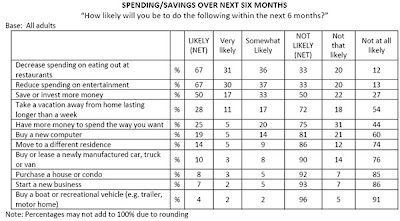 What's true to consumers in India is true to ones in the US. too. Or shall we say the rest of the world? Back in June, a study by Anita and me had found that Indian consumers had cut back on their purchase quantums, ie., 'if they ate out once a week, now its once in two weeks. If they travelled for leisure every six months, now they do so only once a year. The most interesting finding that should bring cheer to the likes of P&G and Home Depot or any other brand out there is that, consumers still haven't switched to a 'cheaper' brand to save money. That is, if one were used to wearing Levi Strauss denims, one still buys the brand, albeit in lesser quantities.'

Consumers in the US. too seem to doing exactly the same as their counterparts in India. Cut back on purchases. A recent Harris Poll found that 'two-thirds of Americans are likely to decrease spending on eating out and entertainment in the next six months'. Note, this is what what they did six months ago. Which means the trend of 'cutting back' is continuing.
Note the results of the survey;
Key findings:

Unknown said…
this finding from your research-

The study also found that consumers stayed true to those brands that they believed delivered value for the money spent. It didn't matter if it were a mass or a premium brand.