What's physical is what attracts 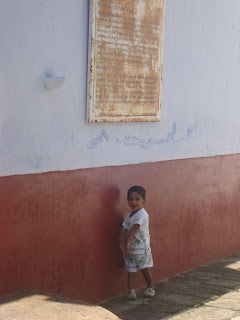 We think Jaden looks mighty cute. That shouldn't be a surprise. After all, we are his parents. But then we witness this phenomenon time and again when we take Jaden out. Perfect strangers are drawn to Jaden. They tousle his hair, or nudge his cheeks, trying to show their affection for him. Why, there was this one time when two girls walked up to us and asked if they could kiss him. He was a baby then. We were taken aback, but decided to let them have their wish. Soon they were on their way grinning broadly. I wonder what Jaden must have felt. I guess he was too young to even know. Nowadays he's more tuned in, but doesn't care too much for people's overtures.

Now I think the simple reason behind the affection strangers show has to do with the physical package that Jaden is. He's mighty cute and he's got a sunshine smile. Those are hard to resist, and so all the affection. But then people have no idea what kind of kid Jaden is. They are instantly drawn to him purely on his physical being. I guess that happens to all of us. The physical is what instantly attracts. What's inside comes later. And what's inside can either reinforce what we feel the first time around, or shatter it beyond repair.
All brands too have a physical part to them. For an FMCG brand that could be the package, its shape and the way its merchandised. For a service brand its the 'physical evidence'. A brand's physical self must appeal for the consumer to make a 'first' move. Of course, what's inside must then deliver. But the first move, that's always on looks.
The most wonderful aspect about Jaden is the fact that he's wonderful beyond his physical self. The attitudes he's picked, and what we think is his intrinsic behavioural self, lift our spirits. So when we celebrate the gift that he is, we do so because of who he is as a little boy. And for that we thank our heavenly father ever day.
We know we will continue with the thanksgiving. Though I think it should be more often.
Email Post
Labels: Brand Attraction Physical Self

student said…
Good One !!
Yes, you are right as the bible tells "The LORD does not look at the things man looks at. Man looks at the outward appearance, but the LORD looks at the heart." - I Samuel 16: 7
But, sadly marketing is all about the package, product comes next and people who design product don't have a clue about how the product is going to be marketed.
Jan 25, 2010, 4:21:00 PM

Gautam Gupta said…
I totally agree with you sir that whats physical is what instantly attracts. What's inside comes later. However, why i find this contrary to what you told me. I hope u don't mind. Yesterday you told me to let know the kind of girl i would like to marry and in reply i said that she should be decent looking. But then you stopped me abruptly "hey a girls heart can be of gold though she is not that great looking". But don't we look at her beaty first is what my question is n then comes intellegence bla bla.
Jan 30, 2010, 1:29:00 PM