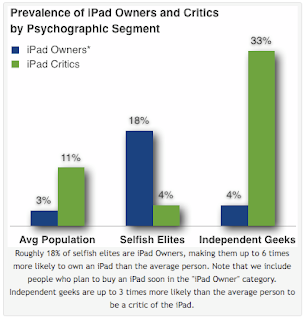 It’s not exactly official, but should also surprise no one: According to a new study the psychological profile of iPad owners can be summed up as “selfish elites” while have-not critics are “independent geeks.”...

Consumer research firm MyType conducted the study, in which opinions of 20,000 people were analyzed between March and May. The firm’s conclusion was that iPad owners tend to be wealthy, sophisticated, highly educated and disproportionately interested in business and finance, while they scored terribly in the areas of altruism and kindness. In other words, “selfish elites.”