Cashing in on a controversy - Does it work ?

Nike has recently released banner ads that cash in on the Don Imus controversy. Though the Ads don't directly mention Don Imus by name it's pretty obvious who they are referring to. This raises two pertinent issues.

One, Do such ads that cash in on controversies work in the sponsor's favour ? 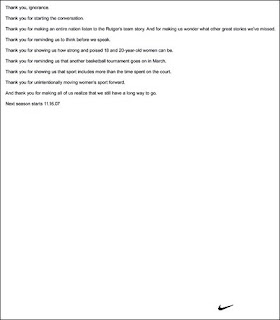 Two, Are companies like Nike hypocritical when it comes to exhibiting concern towards the various injustice in society?
The second one first. Something tells me Nike couldn't care less. It's all an act. If Nike were this concerned, what about the controversy when Nike abruptly dropped Oregon's prep player of the year, Kevin Love of Lake Oswego, from the prestigious Nike-funded Portland Elite Legends team. The young man's sin? Playing at Reebok's summer camp instead of Nike's. Now this 'move' has been termed by some as pure business.

Now, the first issue. Do such Ads work ? The answer is simple. In the short term they do. Sensitive people who have been shocked by Imus' rave would connect with such advertisements. In the long run, everyone forgets. Public memory is indeed short. By the time people forget, Nike Ads would be withdrawn after having achieved what they intended to.