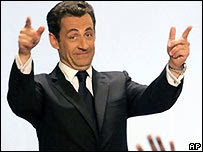 Good to know that the French are looking to move away from their socialist past. Conservative candidate Nicolas Sarkozy has won the hotly-contested French presidential election. Nicolas Sarkozy represents the way France wants to move as it takes on the 'realities' of a globalised world. That he is the son of a Hungarian immigrant itself bides well for France. A man who understands what it is to work hard and reap the benefits of productive labour. A far cry from what France's labour work force is generally used to.

The dropping of the 35 hour work week, at last, made sense in a world where National competitive advantage is dictated by the ingenuity and productivity of its work force.