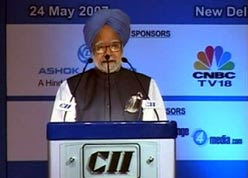 CEO salaries have always a touched a raw nerve. Discussed all over the world in business forums this topic was brought up by the Honourable Prime Minister of India, Dr. Manmohan Singh at the National Conference of the Confederation of Indian Industry (CII). Who better to talk about burgeoning salaries than our modest Prime Minister who has epitomised a life lived with utmost dignity and humility.

In a country where a large cross section of people live below the poverty line, it is shameful to see the rich flaunt their wealth. Sure, wealth that the rich enjoy must not be faulted. But the manner of their exhibition of wealth is what borders on being ugly.

Addressing a CII meeting, the PM said while Indian industry's success in wealth creation is worth celebrating the corporates should share the benefits of economic growth with the common man. The companies should contribute more to employee welfare and desist from granting excessive remuneration to promoters and senior executives. Mr. Singh asked companies to stop forming cartels to keep prices high, check rising CEO compensations, offer employment to the less-privileged, and ensure that corporate social responsibility is not defined by tax planning strategies alone. The PM's speech, received in pin-drop silence by the cream of Indian industry at the National Conference of the Confederation of Indian Industry (CII) here today, outlined a 10-point social charter aimed to supplement the governments attempts to make economic growth socially and regionally inclusive.

India Inc. has not reacted favourably though there is agreement on certain issues.

ASSOCHAM President V N Dhoot said that the salary packages should be decided by the industrial houses themselves. "It should be based on the competence level of the people being hired,” Dhoot added. However, a code can be developed on the salary structure of CEOs after a consensus.

FICCI, however, reacted with a different approach and agreed what the Prime Minister said.
"We will keep in mind his (PM) advice on structuring executive salaries in the context of the overall national priorities," FICCI President Habil Khorakiwala said.

However, the three chambers were in complete agreement with the Prime Minister to check the ostentatious expenditure and vulgar display of wealth by the rich and famous.
CII Chief said Prime Minister's concern was in view of the wealth inequality in the country and ‘in-your’ face spending that hurts people. "It is completely uncalled for and would lead to social unrest," Dhoot said. Khorakiwala said a culture of savings and investment should be promoted and conspicuous consumption be shunned.

Business Standard reacted thus , 'Manmohan Singh was at his most naive when he asked companies to not pay senior executives too much money. Salaries are determined in a competitive market, and companies usually do not pay more than they need to—and there are enough salary surveys in the market to advise employers on the prevailing rates. Further, salaries tend to rise when markets become contestable, because a company’s leadership in such situations makes all the difference. Static markets do not have comparable salaries because leaders make less of a difference, relatively speaking, to the bottom line. It so happens that Indian product and service markets are far more competitive today than before, and simultaneously Indian managerial talent realises that it has a global canvas. The result is greater salary differentials. It is of course true that studies in other countries have shown an absence of correlation between salaries and CEO performance, and sometimes bloated salaries reflect internal power structures more than external competition. However, it would be fair to say that conspicuous consumption, while on the rise in India, is nowhere near the levels reached elsewhere—as testified to by the low sales of luxury goods, which is a reliable barometer.'
Pic : www.ibnlive.com
Email Post