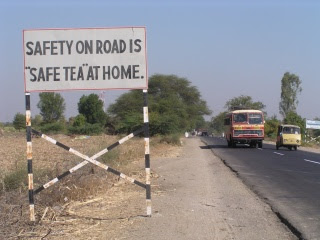 Driving in Bangalore is quite the challenge. The most important aspect while driving in Bangalore city is never about being careful of the way one drives, but is about being careful of the way others drive. To avert any accidents all one has to do, in India, is to 'pre-empt' what other drivers would do, and act accordingly. Once this art of pre-emption is perfected, any driver can navigate the roads in Bangalore or any where else in India without as much a hitch. In pre-empting, a driver has to keep his/her mind open to the fact that he/she will encounter vehicles coming out of nowhere, cutting across lanes, turning without any indication...and other similar acts.

Accidents on Indian roads have now reached gargantuan proportions. Take Kerala for instance. (2001 report) While population in Kerala is declining with couples settling for one-or-two child norm, the vehicle population is soaring without correspondent infrastructure. So, of course, do the number of deaths and injuries on roads.

The vehicle population in the state, with three crore people, stood at 19.10 in 2001 as against 1.90 lakh in 1980. Every year, around two lakh vehicles are added. Of this 60 per cent are two wheelers, the transport data of the Planning Board states. Buses, the indicator of public transport system, form only 1.87 per cent of the total. Little wonder the poor are pushed to greater difficulty and so the overloading, and accidents result. The road length in all, including the national highways, come only to 1.24 lakh kilometres. Of this, really "motorable" roads are just 30,000 kilometres, the remaining being an apology for roads. The number of road accidents in Kerala rose to 34,387 in 1999-2000 as compared to 33,296 in the previous year. In all, 2,590 people died. Those suffered injuries of varied intensity were 47,860, which is second only to Maharashtra.

AJ said…
Trining not criticism will help. This site http://driving-india.blogspot.com/ has been created with the purpose of providing driver education and training to all Indian road users. It is by far the most comprehensive website providing training in defensive driving. Learning simple road habits can make our roads safe and also free up congestion caused by traffic chaos.

At present 17 driver education videos aimed at changing the driving culture on Indian roads are available. The video are unique in that the footage is real life action from streets of London. We have copied the Western habits: Replaced the dhoti with denim, high rise buildings for Indian cottages, burgers and coke instead of Indian breads and perhaps sugarcane juice. Surely we can copy the Western ways of travelling too.

To watch the videos, interested readers may visit: http://driving-india.blogspot.com/

The videos cover the following topics:

Anonymous said…
I want to say how friendly and very help full that Lancing Driver Training were from the first phone call and my first lesson to my last lesson and on the day of my test and even after my test. They helped and guided me through the experience of driving such a large vehicle in a calm and un-rushed professional manor , but at the same time made me fully aware the responsibilities that are involved in becoming a professional HGV Driver. ny defensive driving
Jul 25, 2011, 12:52:00 PM

dhoottraining said…
I think the government should take some strict steps towards this. This is not at all a proper driving, if this is not reduced, the accidents cases will keep on increasing.

Ganeshmal Tejraj Professional commercial kitchen equipment offers the robustness required for the harsh environment of the catering kitchen, whether that is a restaurant chain, a residential care home or a small coffee shop.

Tejtara said…
Ganeshmal Tejraj Professional commercial kitchen equipment offers the robustness required for the harsh environment of the catering kitchen, whether that is a restaurant chain, a residential care home or a small coffee shop.

Unknown said…
Thanks for sharing the post! Get the Best Online Bus Ticket Reservation Services in all over India in one step with Ticketgoose. TicketGoose is not only providing the Online Ticket Booking Services, it is providing services like what are the places to visit in each and every state. We had Travel agents to contact in each area for all states.
Bus Tickets

Peace in Pieces said…
I went down to the driving school’s office prepared with my cash because of their reviews. It was affordable and I opted for a 10 class package, and the road test.
MR truck license QLD
Dec 5, 2013, 3:44:00 PM

Unknown said…
Nice post, I bookmark your blog because I found very good information on your blog, Thanks for sharing more informationQuality Services & Training Pvt.Ltd.