The last time there was a buzz regarding Shah Rukh Khan pitching for a product, it was his bathtub dalliance for HLL's Lux Soap. The commercial for Lux reportedly gathered so much publicity, and generated so much 'shock and awe', that after the commercial, it not only arrested declining brand fortunes, but also led to a spurt in sales. 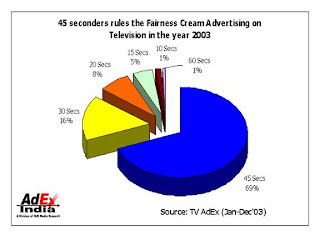 This time around, the buzz is, SRK will wax eloquent for emami's Fair & Handsome fairness cream.

Fairness creams have a huge market in India, both urban and rural. As of mid 2006, FMCG major Hindustan Lever Ltd (HLL) relaunched its flagship brands Fair & Lovely anti-marks and ayurvedic creams in domestic markets, Emami Ltd and CavinKare are geared up to export their fairness brands to African and Asian countries. Godrej Consumer Products Ltd (GCPL) is extending the global reach of its brand FairGlow to the UK and the Middle East. In the Rs 950-crore market for fairness products, the colour of competition is intensifying as major players are chalking out fresh game plans to woo complexion-conscious consumers across the globe. According to industry analysts, Indian FMCG majors are now eyeing global markets after establishing their fairness brands in domestic markets. Cashing in on the craze for fair skin, FMCG majors are now extending their global reach to Asian and African markets.

In India, the sector had registered 20% growth in 2006, say analysts. As part of its export strategy, swadeshi major Emami Ltd is gearing up to take its fairness brand Fair & Handsome to Asian and African markets. Fair & Lovely fairness cream, with a penetration of 75%, accounts for 60% of the skin care market in rural India. It also enjoys the undistinguished patronage of 58% of its user households. Both Pond’s and Fair & Lovely are enjoying a monopoly in the rural markets in their respective categories.

The funny part of the report in ET on SRK's new pitch?

This is how they put it , 'Some modern philosophers have always said the ideal human state is androgynous. The man-woman concept is a language-perpetuated tyranny that only facilitates oppression of women. To achieve the state, the human slate would have to be wiped off clean. Thinkers and theorists would be pleased to know that Bollywood, that crucible of hip and hamstrung ideas, is fashioning a script that aims at achieving that state. Its reigning god (yes, only gods can break the rules) Shah Rukh Khan is going to pitch for a fairness cream. King Khan, as they call him, and Queen Khan as they may call him after he endorses Emami’s Fair & handsome brand. The man has merged into a woman — the ideal state.'