Freegans - Living off dumpsters; I'd rather buy! 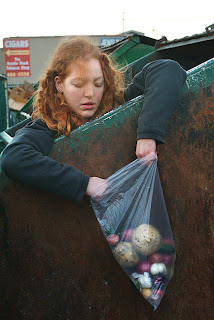 Today's NY Times : On a Friday evening last month, the day after New York University’s class of 2007 graduated, about 15 men and women assembled in front of Third Avenue North, an N.Y.U. dormitory on Third Avenue and 12th Street. They had come to take advantage of the university’s end-of-the-year move-out, when students’ discarded items are loaded into big green trash bins by the curb. The gathering at the Third Avenue North trash bin quickly took on a giddy shopping-spree air, as members of the group came up with one first-class find after another.
A few of those present had stumbled onto the scene by chance (including a janitor from a nearby homeless center, who made off with a working iPod and a tube of body cream), but most were there by design, in response to a posting on the Web site freegan.info. Freegans are scavengers of the developed world, living off consumer waste in an effort to minimize their support of corporations and their impact on the planet, and to distance themselves from what they see as out-of-control consumerism. They forage through supermarket trash and eat the slightly bruised produce or just-expired canned goods that are routinely thrown out, and negotiate gifts of surplus food from sympathetic stores and restaurants. They dress in castoff clothes and furnish their homes with items found on the street; at freecycle.org, where users post unwanted items; and at so-called freemeets, flea markets where no money is exchanged.
Pic : www.freegan.info
Email Post