Agriculture
Of nearly 218 million children engaged in child labor around the world, the vast majority—69 percent, or some 150 million—are working in agriculture. Child agricultural workers frequently work for long hours in scorching heat, haul heavy loads of produce, are exposed to toxic pesticides, and suffer high rates of injury from sharp knives and other dangerous tools. Their work is grueling and harsh, violating their rights to health, education, and protection from work that is hazardous or exploitative. 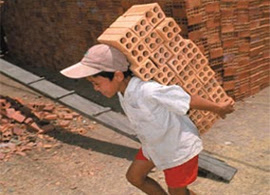 Domestic Work
Millions of women and girls around the world turn to domestic work as one of the few options available to them in order to provide for themselves and their families. Instead of guaranteeing their ability to work with dignity and freedom from violence, governments have systematically denied them key labor protections extended to other workers. Domestic workers, who often make extraordinary sacrifices to support their families, are among the most exploited and abused workers in the world.

Bonded Child Labor
Bonded labor takes place when a family receives an advance payment (sometimes as little as U.S. $15) to hand a child-boy or girl-over to an employer. In most cases the child cannot work off the debt, nor can the family raise enough money to buy the child back. The workplace is often structured so that "expenses" and/or "interest" are deducted from a child's earnings in such amounts that it is almost impossible for a child to repay the debt. In some cases, the labor is generational-that is, a child's grandfather or great-grandfather was promised to an employer many years earlier, with the understanding that each generation would provide the employer with a new worker-often with no pay at all.