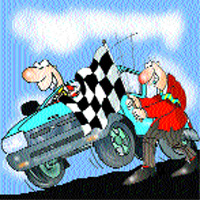 From the TOI : Even as competition has built up to unprecedented levels in the car market, one segment has remained untouched - that of entry-level small cars. But that's all set to change from next year, with a slew of cars priced around Rs 1 lakh ($2,500) revving to get off the blocks.

The first launch will be that of Tata Motors' much-talked-about Rs 1 lakh car. But in just a couple of years, Indian consumers may have half-a-dozen such vehicles to choose from. Nissan Renault on Thursday joined the bandwagon, unveiling plans for a $3,000 (around Rs 1.25 lakh) car for Indian roads. Nissan Renault is expected to team up with Indian manufacturer Mahindra & Mahindra to enter the sub-Rs 1.5 lakh segment in which the likes of Hero Group, Bajaj Auto and Maruti Suzuki, the original common man's car manufacturer, have already evinced interest. Even Xenetis, a low-cost PC maker, intends to be in this segment.

The One lakh car from the stable of Tata Motors could create a major dent in the top-end motorcycle market with its lucrative price tag. According to JD Power, the two-wheeler market in India could see a dent at the top-end because of the Re One-lakh car, but how far reaching will it be, will depend on the product's performance, after sales service and overall customer satisfaction.