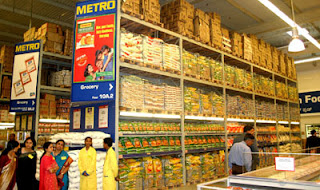 Most Food and Beverage companies in India are paying close attention to how their beverage products, especially Juices (still beverages), which are now gaining prominence over fizzy drinks, are packaged. All of these companies jostle for 'prime' space on Indian Retail shelves and also do everything possible with their packages to 'catch the eye' of India Retail consumers.

BS reports about how brand dressing and packaging innovation is fast becoming the food and beverage industry’s favourite indulgence. But sitting pretty atop the retail showcase is not the sole function of the new, improved products.

Within the last two months, Amul has re-designed the packaging of three of its products — ice creams, cheese and shrikhand. While making the product more attractive and eye-catching is the primary reason, for Amul the innovation in packaging also carries another message — widening its target audience and being a crowd puller at the retail outlets.

When Dabur Foods introduced the tetra pack for its juice range Real, the company made an investment of Rs 3-5 crore. Thereafter, every time the company innovates on its packaging design, it spends a minimum of Rs 15 lakh. Take this time, for instance. The Real range has been re-designed once again, with more colour, more activity and more appeal at a cost of almost Rs 18 lakh. It’s an investment that others like Coca-Cola, Frito Lay, Britannia and Nestle enjoy making.

This April, Coca-Cola launched the new look Limca, curvy and seductive. Called the Limca Splash bottle, the company affirms that the decision behind the new bottle was to give it a better grip, for the consumers... and over the market.

The most insipid packaging amongst all this hoopla has been Minute Maid Pulpy Orange. In the fruit juice/pulp segments, Pulpy Orange has the least attractive packaging design though this is amply compensated with a lower price point. Whether 'Pulp Orange' will do well in the future remains to be seen. Its initial sales are very promising. In the short period time since launch, Minute Maid the orange fruit drink from Hindustan Coca Cola Beverages Private Limited has notched 2 million units (400 ml and 1 litre packs) sales in the states of Karnataka, Andhra Pradesh and Tamil Nadu. The company is upbeat about further growth.