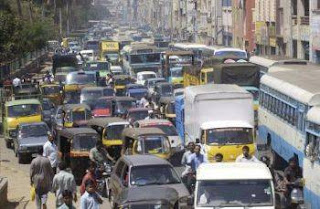 From the TOI : For a city which is among the 10 most-polluted in India and Asia, second only to Delhi in vehicle population, Bangalore — with its rising mercury level — is a contributor to the global warming phenomenon. Difficult to digest? Here are some hard-hitting facts.

The air-conditioned city is under severe threat. In a decade, it will be mentioned in the same breath as Raichur, Gulbarga and Bijapur! The city has seen an unprecedented mercury movement which will touch 40-plus degrees by 2020, a clear indication of the city's lead in global warming.

From a minimum of 32 degrees in 1901 to 36 degrees in 2007, the pattern has shaken up the science fraternity. The worst part is the unusual rise in temperature over 20 years - a phenomenal 3 degrees rise since 1988.

With a vehicle population of over 28 lakh and over 80 lakh people in the city, the land use pattern is definitely abused. And the less said the better about air pollution.