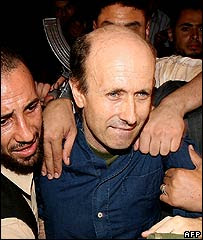 BBC correspondent Alan Johnston has been released by kidnappers in Gaza after nearly four months in captivity.
He said it was "fantastic" to be free after an "appalling experience". TV footage showed Mr Johnston, 45, leaving a building accompanied by armed men. He later appeared beside Hamas leader Ismail Haniya and thanked everyone who had worked for his release.
Email Post