'Credit' never due where deserved 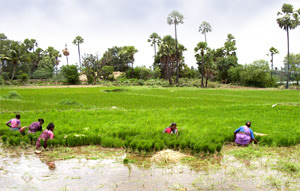 I guess most of us have been in situations where we watch agape someone else walking away with credit they don't deserve. This happens in our social and professional lives. In Business too this is common.

Take the case of farm credit. In India, farm credit never reaches those places in desired quantum where return on farm credit is the highest. In this report from IE, its been found that the North-East and Jammu and Kashmir have emerged as the best performers in the India in terms of the value of agricultural output generated compared to agricultural credit consumed.

According to “Agricultural Gross District Domestic Product 2005-2006” figures compiled by Indicus Analytics, 19 of the North-East’s 72 districts and four of Jammu and Kashmir’s 14 districts have credit to agricultural output ratios of more than 50, implying that the value of their outputs is 50 times more than the value of the credit consumed by them.

What may startle many, including agriculture experts, is the fact that barring a few, all districts in this area have double-digit rates of return. This is in stark contrast to the national average of 4.04, which has more than halved from 9.6 in 2001. The credit consumption patterns shows that less productive districts are consuming above average credit while districts with exceptional productivity are consuming credit at below average levels.