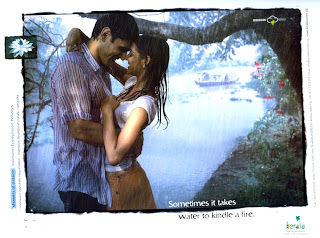 From today's BS : The monsoon, which is traditionally seen as an off-season in the tourism industry, has taken off very well this year.

Monsoon tourism, as it is known, has performed beyond the expectations of tour operators, garnering a 50 per cent increase in both in-bound and out-bound traffic. Last year, the industry saw an increase of only 15-20 per cent in monsoon tourism.

While Goa and Kerala ( note the brillaint Ad campaign titled, 'Sometimes it takes water to kindle a fire', by the Kerala Tourism Authority) remain the top domestic destinations, West Asia is still a favourite with travellers heading for international destinations. Over the years, the number of international tourists visiting India during the monsoon, especially from the Gulf countries, has almost doubled.

Unknown said…
Well who does not love rain? I know I do. I am from Kerala and I know that Kerala looks even more beautiful in the monsoon. That is the time when it really proves to be "God's own country".
That Kerala Turism Authority has finally tapped this opportunity, is a step in the right direction.
Jul 17, 2007, 8:22:00 PM