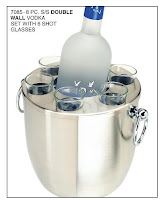 The Russian vodka market has been the undoing of foreign players. Foreign companies trying to sell their vodka in Russia have had to face numerous problems, some due to their own doing and others due to the market itself.

Russia is the world’s biggest market for hard liquor. According to the market research agency Biznes Analitika, last year 2.4 billion litres of vodka were sold in Russia, to the tune of $15.7 billion (not counting public catering). But it is quite an ordeal to work on the highly competitive Russian market — last year it had 250 producers and more than a thousand brands. The five leading breweries control over 70% of the beer market, whereas the five major vodka distillers have a modest 27% of the spirits market. For the time being, global companies have achieved nothing to boast of in Russia — the share of imported vodka is going down. Ukrainian producers are the only exception. They have gained a firm foothold in the premium sector, selling half-litre bottles for 150-250 rubles ($6-10).

1. Price-wise, imported vodka cannot compete with the mass-produced brands in the medium-priced brackets and automatically falls into a narrow super-premium segment (over 250 rubles per bottle), more than half of which is controlled by Russian company Russky Standart.

2. Foreigners are not good at marketing their products in Russia. In the West, advertisers target young patrons of nightclubs and bars who do not drain a shot in a single gulp, preferring to order vodka-based cocktails.

3. Foreign suppliers also tried to promote vodka as if it were a whisky without scent or colour that was good for cocktails. But conservative Russian consumers drink vodka straight, just like they always have. Besides, vodka has always been considered a drink of the masses, and it is no surprise that the growing middle class is losing interest in it.

4. Vodka sales are also on the decline — last year they dropped by 10%. In the Russian market, fake vodka is still widespread. Some estimates put its share of the market at 40%. The state-owned company Rosspirtprom has calculated that in 2006 a mere 1.19 billion litres of vodka were produced legally in Russia, which is much less than was sold by reputable retailers.

The market situation in Russia will change once, Russia joins the WTO. When it does, major chain retailers will enter the Russian market and foreign producers will work with them here as they do in the West.