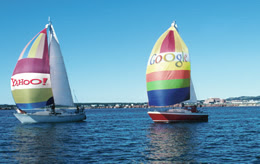 CNET news; Can she turn Yahoo into, well, Google?

Over the last 18 months, Yahoo has suffered its biggest slump since the collapse of the dot-com bubble. The company has been eclipsed by the phenomenal rise of Google, which handily beat Yahoo in the most lucrative business on the Internet: search and search advertising. As a result, Google now makes far more money in one quarter than Yahoo does in a year, and Google's market value of $162.8 billion is more than four times that of Yahoo, which stands at $36.5 billion. As Yahoo races to close that gap, its bread-and-butter business--the sale of banners and other graphical ads--is showing signs of weakness amid growing competition from MySpace, Facebook and countless other sites.

Analysts, meanwhile, say that Yahoo, a company with 12,000 employees, has grown bureaucratic and slow, causing it to miss out on some of the hottest Internet trends, like social networking. They say it has also missed out on some of the smartest potential acquisitions, including YouTube, which was bought by Google, and Facebook, which Yahoo once considered buying. Now Facebook says it is not for sale, and even if it were, the price would likely be far higher than the $900 million or so that Yahoo offered last summer.