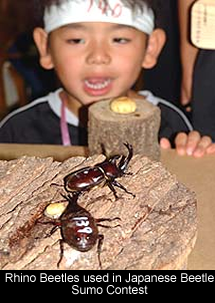 Tokyo recently witnessed the 'battle of the beetles' featured in the "Kid's Beetle King" boxing tournament.

Rhino beetles—which look like miniature tanks with a horn, are popular pets among Japanese boys, many of whom catch and collect them on lazy summer days, breed them and even put them in a ring for a round of beetle boxing.

Some ardent beetle fans have even turned to imports in a search for bigger and stronger breeds.
There's no official data on how many beetles are imported into Japan, but the number of beetles inspected at Japanese airports has quadrupled since 2000, according to the agriculture ministry, and beetle shops are doing brisk business.