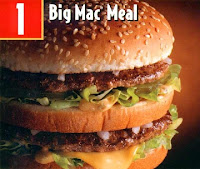 The Big Mac was first introduced in 1967 by Jim Delligatti, a McDonald's franchise owner in Uniontown, Pa. A year later, it became a staple of McDonald's menus nationwide. The sandwich has become a veritable pop culture phenomenon, spawning everything from an impossible-to-forget jingle ("Two all-beef patties, special sauce, lettuce, cheese, pickles, onions on a sesame-seed bun," anyone?) to a currency-evaluation index created by The Economist. McDonald's estimates 550 million Big Macs are sold each year in the U.S. alone. Do the math and that's about 17 per second. Weighing in at nearly a half-pound, with 540 calories and 29 grams of fat each, that's enough to make nutritionists cringe. Love them or hate them, the Big Mac has grown from its humble beginnings to become a cultural unifier.
Email Post