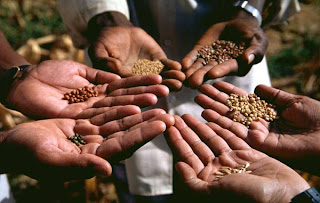 For all those concerned about the 'impact' of large format retailers in India, spare a thought to what's happened and what may happen to the farmer. Competition between Reliance Retail and Kelloggs has raised the 'farmer's produce's realisation' in the process. Most big time retailers source directly from the farmer. Now these firms are slugging it out to have their hold on the farmers' produce by offering to pay more.
ET reports that while Reliance Retail has already initiated a price war in direct sourcing of wheat from farmers in Madhya Pradesh, it is expected to start the process in 2-3 more states later this month. Haryana and Uttar Pradesh are reported to be on its radar for wheat. Though the price being offered by the company could not be confirmed, sources say that to counter Reliance’s bid, Kellogg’s has doubled the offer to farmers to an incredible Rs 2,700 per quintal in Madhya Pradesh. This is more than three times the official minimum support price of Rs 850 per quintal.
Pic : http://ngin.tripod.com
Email Post