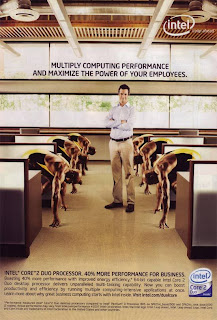 Intel, the world's largest semiconductor company, was forced to apologise after a print ad circulated by the company around blog-land invited wrath from around the world over its racist connotation.The ad shows six black sprinters crouched in the start position in front of a white man wearing a shirt and chinos (khaki pants) in an office.

In a statement on its website on Friday, Intel said: "We made a bad mistake. I know why and how, but that simply doesn't make it better." It was intended that the advertisement "convey the performance capabilities of our processors through a number of visual metaphors", Don MacDonald, director of global marketing for the company, wrote.