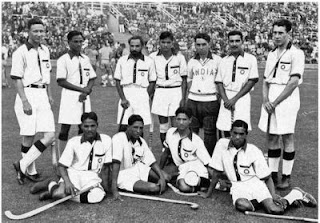 LIMOW has articulated exactly what I intended to say. As the euphoria over India's win in the T20 world cup dies down, spare a thought for cricket's poor cousin, hockey. The Indian hockey team did the country proud by winning the Asia Cup thrashing the Koreans, 7-2. In spite of this creditable feat, there were no recognitions forthcoming.

A CCN-IBN news discussion last night touched upon this step motherly treatment that hockey gets. What got my goat going is the decision on the part of Hockey Federation to award Rs.1000 for every goal scored on the field and deduct Rs.2000 for every goal conceded! Disgusting! Even more so when compared to what Yuvraj got for the six sixers. A crore of rupees and a Porsche 911. What's pathetic is to listen to someone like KPS Gill defending the measly 50,000 rupees doled out to hockey players by saying that the amount was quite a sum. Wonder what a policeman's doing, running hockey.

Its sad to the see the state of neglect that Hockey has been subject to, in a country where this sport is responsible for the maximum number of Olympic gold medals. Don't blame the hockey players for considering a hunger strike. It high time the Government (Central and State) and the media noticed. Also remember, the world cup in cricket has just around 10 teams participating...world...indeeed!